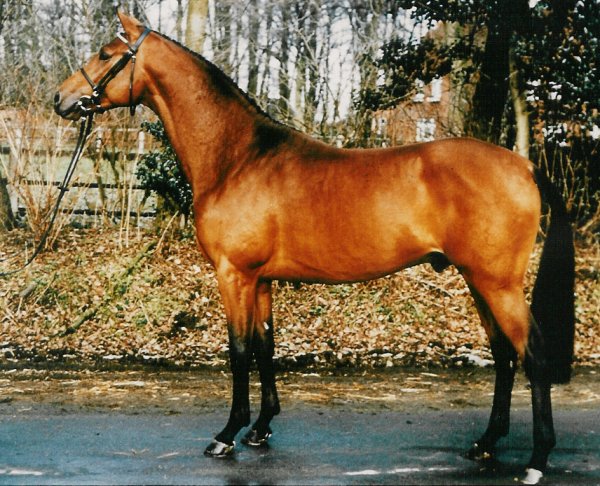 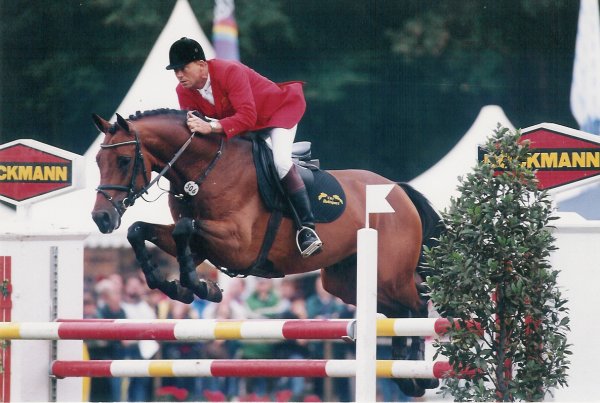 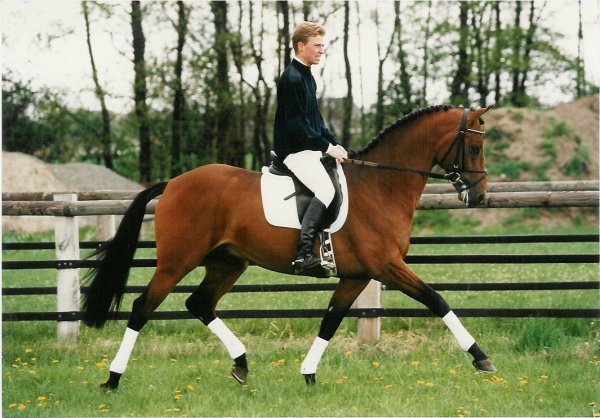 Landfriese II adds a nice dose of Thoroughbred blood from the stallions Ladykiller XX (twice), Marcio XX and Vollkorn XX. This is not just random TB blood. Landfriese’s pedigree includes the best producing TB sires in the sporthorse world, and his production performance record shows he is true to type and performance.

With tremendous movement, it is not surprising that he became a premium stallion at the Oldenburg inspection and 2nd Reserve overall. As a 4-year old he qualified in the Performance Class and won the Jumping Class L. In 1996 and 1997 he was a Bundeschampion Finalist both years and placed well. Furthermore, in 1997 he was the best horse at the National Championships for his age group. He has won several jumping shows, up to 1.45 meters until an injury ended his jumping career after which time he was shown in dressage to level M.

Landfriese II is one of the most successful stallions in breeding. He has numerous offspring competing at the highest levels in jumping, dressage, eventing and hunters. He has sired over nine approved sons and many state premium mares. His first foal crop contained unbelievable quality, conformation and fantastic movement. You can find Landfriese II offspring all over the world performing at international jumping competitions, as well as, dressage and hunting. In 2001, one of his offspring won the stallion selection in Redefin, Germany. In 2002, he had eight offspring qualify for the finals at the Nation Championships in Germany, for five and six yr. olds. He is currently #10 on U.S.E.F. list of hunter sires for 2006 and the top Oldenburg listed.

Landfriese II was standing at stud at Paul Schockemöhle’ s farm and the state stud. During that time Paul bred several sales toppers with Landfriese II. Several went on to be successful up to Grand Prix Level. Landfriese II produced also quite a few Mecklenburg offspring including a son named “Little Rock Gold” who was the Mecklenburg licensing Reserve Champion and premium stallion he now stands in Sweden.